The last post relied on the Monte Carlo method to determine the probability of correctly assessing relative accuracy. The linked document is a more a complete answer without any of the Monte Carlo drawbacks.
20091213_Hays-LoadComparisonStats

I have a rifle that shoots 3-inch 5-shot groups at 100 yards.  This is not adequate for hunting where commonly shots are 200 to 300 yards distant.  As I work toward resolving this, there are some interesting statistical problems of practical importance.

In each experiment, how many shots should I fire to measure the spread, 3, 5, 10?

Having fired these shots, how should I measure the “spread”?

When comparing different groups, how likely is it that I will reach a true conclusion with my measurement?

The following figure shows that, using the maximum spread measurement, for contrast ratio of 1.5, a 3-shot group provides about a 76% chance of correctly determining that ammunition B produces a larger group.  A 5-shot group has taken the chance to about 85%. 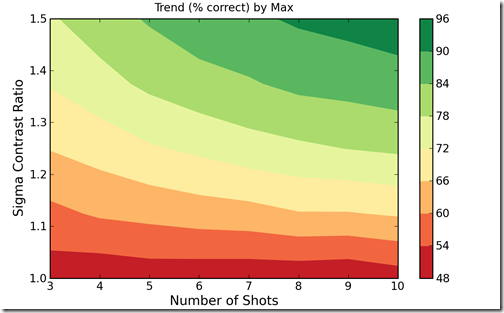 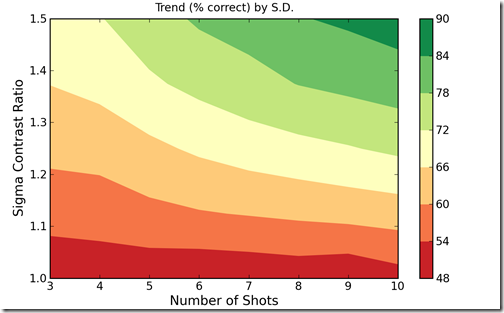 How well can you quantify how much better A is than B?  The following chart shows the average ratio of the maximum spread from A divided by the maximum spread from B.  One observation is that by 10 shots the results appear to be biased.  On average the contrast ratio is underestimated.  The bias seems to be consistent enough to be corrected. 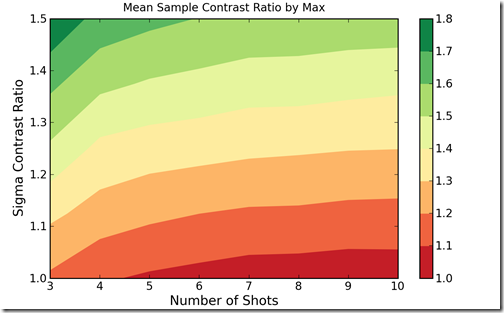 The ratio of the sample standard deviations, as the next plot shows, may be less biased.  By 10 shots, though, the estimator is shown to be terrible.  As with the maximum spread technique, the bias may be correctable.  The slow rate of convergence is not heartening. 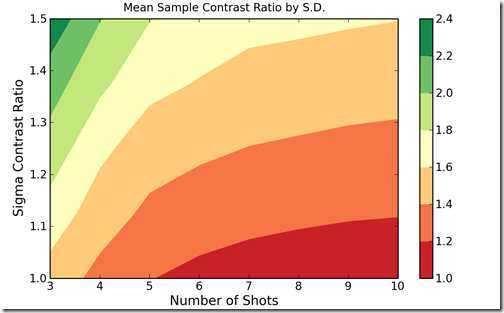 My conclusion is that for small ratios a 5 shot group is barely adequate, though coarse differences can be revealed.  I will not waste time with exotic measurements of the spread—the maximum spread appears to be superior than the any of the other methods I have tried.  Without any information in advance of the test I would prepare for a five shot comparison.  Some test of statistical power should probably be applied, analogous to Student’s t-test but for the maximum spread.  Obviously, similar spreads should be treated with caution.

This study was performed with Monte Carlo processes because the analytical solutions for maximum spread probabilities are relatively complex—n-fold convolutions of distributions.  I believe the solutions to be available, but I lazily elected computer horsepower to Park-power.