Many things are the same since the previous version.  The obvious differences are that the menus have been re-colored to be higher contrast.  I find it overdone and a little garish, but not a big deal overall.  To me the old version (figure right) is easier to read.

Corel upgraded the photo organization tools some, and there are distinct improvements.  Like Picasa and Elements, photos can be grouped virtually into “Collections”.  Other software may call them albums.  The organizer does a passable job of including the EXIF and IPTC data.  Captions in Picasa show up in the “Description” IPTC field, rather than the “Caption” field, so moving between those two programs at least is a little bit of a pain.

The tag editor is quite disappointing, as it does not appear to have any method of making common tags easily accessible—which means typing “Angus Hays” for every picture that includes my dog Angus.

The “email picture” capability did not improve in any important way–it is still just tied to the Windows MAPI system.  Fine if you’re brain damaged enough to use Outlook, but a complete failure for those of us in the Gmail crowd.

The upload tools for interfacing to web services appear to be part of a different application called “Corel PaintShop Photo Project Creator” which rolls off the tongue.  CPSPPC seems to be worthless, as it only interfaces to Facebook, flickr, and YouTube.  There is no option to add plugins or support for Picasa, MPIX, or any of the other services I use regularly.  CPSPPC provides tools to make backups, photo books, uploads, order online (only from Corel’s affiliate, who is not named prior to upload, does not offer an ICC profile, etc.).  Furthermore CPSPPC does not include any of the Photo Organizer’s tools for searching—all the albums you created in PSP Organizer are useless if you want to use them in, for example, a photo book.  Unbelievable, the project manager must be a drooling moron.

Anyway, Picasa offers services like that which are orders of magnitude better than Corel’s or Adobe’s—it is really the photo editing tools that I care about.  It is worthwhile to know that Corel is still ranked third in class on photo organization.

I wanted Corel to include an “Out of Gamut” display to help with color management, and that is sadly missing.  They did not appear to have changed anything about their color management processing at all, it is still basically OK but not exactly mind blowing.

However, it appears to have included at least two things I care about:

You may recall that vibrance was the one feature from Photoshop that I really wanted in PSP, and with that I think we have a nearly complete sweep.

Corel loaded in a bunch of other features that I expect to be disappointed in, such as a photo organizer; it is unlikely they’ll top Picasa for my uses.

You can visit their sales page here.  They are offering a free trial– I will almost certainly upgrade.  With luck I will post a review this weekend.

For Christmas I received a box of slides that had belonged to my grandfather. The slides were 35 mm taken between 1955 and 1961, in a mixture of black and white and color. I do not own a slide projector, and some of the film was starting to deteriorate, by yellowing or showing blotches where the emulsion had retreated. It was apparent that these slides would be much more enjoyable converted to digital, and so I scanned them. This entry is the story of that scanning, for the technical voyeur and for my own notes. 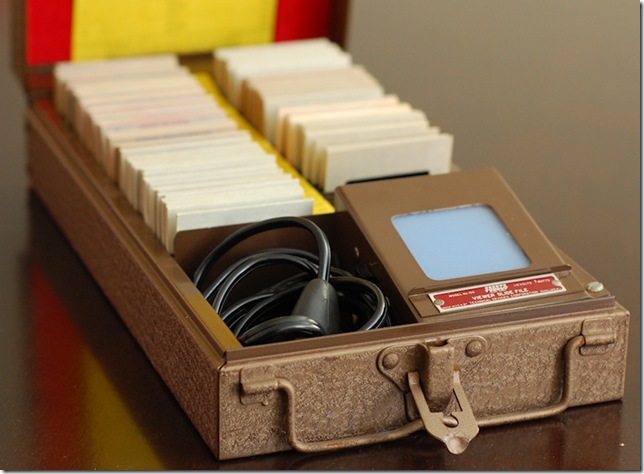 The first step was to determine the resolution at which to scan the slides, and possibly a lower resolution for the final scan. Usually when I scan photographs I try to scan at about the resolution of the original image–usually about the scale of the “graininess” in the image. If the graininess is smaller than the blurriness in the picture I would scan to fully sample the blurriness, but no finer.

There are some resolution choices to consider that do not require experimentation. Velvia 50, which has a reputation as an excellent film, indicates resolution typically coarser than 150 lines/mm (3,810 lines/inch). 150 lines/mm corresponds to an equivalent of about a 20 megapixel camera. A recent era camera like the Nikon D300 has a 12.3 megapixel sensor, which corresponds to a resolution of 119 lines/mm (3,030 lines/inch), after adjusting to make it 35 mm equivalent.

The following picture shows a portion of a color slide scanned at my scanner’s maximum resolution,12,800 samples per inch, followed by a resampled version of the same image at 2,133 dpi (1/6), followed by too coarse a scan at 1,067 dpi (1/12). Notice that the correct resolution is not far from a 6 megapixel camera, about the same as my Nikon D40.

The following picture follows the pattern of the color slide, but is of a black and white slide. The resolutions are the same as with the color slide.  For the small parts I have radically stretched the contrast.

I scanned at 16 bit/channel (48 bit color) for most slides. The reason to do this is that the slides require some significant color processing. Most of the slides are severely overexposed, and typically badly yellowed. In truth, if I were to simply fix the exposure issues and deal with the yellowing it might be OK to scan with 8 bit/channel. However, it is not clear that this processing is the last these slides will see. While the final output of the process stream will be a JPEG (which is limited to 8 bit/channel) I would like that JPEG to be fully utilized so that future editing does not lead to posterization or banding. 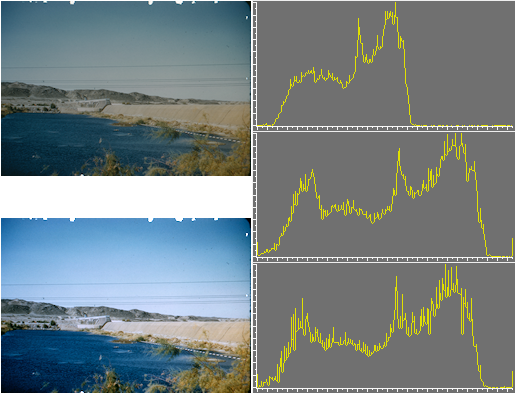 The slides include a variety of flaws. Most of them are underexposed. Most of them have also yellowed with age. There are places on some slides where the emulsion has what appear to be crystals growing, and others where the emulsion has retreated from small sections.  The following picture shows dark spots in some areas which are the caused by this crystalline looking deposit.

The following slide has clear parts, where the emulsions appear to have retreated.  On most slides this is only near the edge and the best solution is cropping.  However, on some slides it affects a subject’s face and must be hand painted. 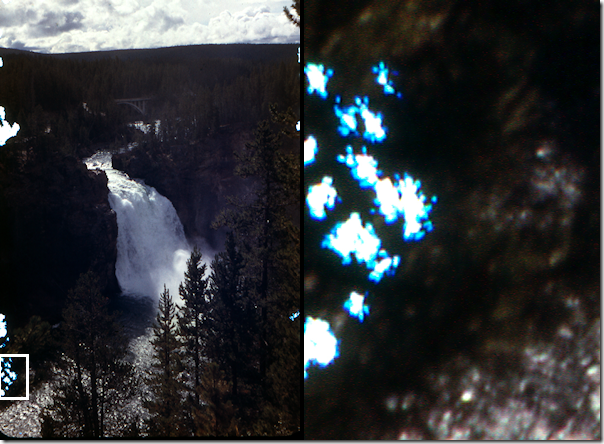 Color correction and contrast enhancement was performed with the “levels” or “curves” controls and the “color balance” tools. The results of those operations are shown on the following image.  The left-most frame is the original scan, which looks like a badly overexposed black and white picture.  The middle image has somewhat better exposure, but looks like a sepia toned image.  The rightmost picture is color corrected, and reveals that photograph was not actually black and white, but a color photo.  Note that this picture isn’t really worth saving due to the motion blur and subject matter, but it is revealing of the impact of basic editing.

In addition, the process of digitizing the image introduces dust motes and fibers, some of these dust particles are clearly visible in the frames above.  To control the motes and fibers I brushed each slide on both sides, brushed the light source, and cleaned the scanner bed between each scan.

Most mote correction was accomplished with the clone brush. This worked for any region where the pattern was consistent and broad, such as the sky, or on gravel. However, across people’s faces the clone brush did not produce very good results.

The fibers often crossed faces or fingers, or other hard-to-clone regions. The brush seemed powerless to remove the fibers too, though it was efficient at moving them. The dirtiest slides were scanned twice, with brushing in between. Then the slides were overlaid, masked, and the top slide’s dirty parts erased to reveal the clean slide underneath.

While the method is effective, it is also a pain. In addition to doubling the scanner time, it increased the processing substantially. The slides had to be registered very accurately for the method to work. This required careful positioning, and rotation. Both operations were agonizing due to my computer speed. For color slides it was nearly intolerable, as my software crashed when I tried to use more than one color 16 bit/channel layer.

For reference, to register two images you take the two scans and make them layers in a single image, then set the “blend mode” to “difference”.  Perfect registration will reveal a black screen.  The figure below shows the full image on the right, and the difference image on the left.  The white outlines tell that I don’t have the image exactly registered, perhaps the rotation is a little wrong.

The layers that comprise a finished product include the two “rasters” and the “mask”, as shown in the layers dialog below. 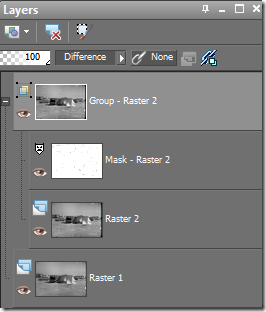 Except for some scripting to automate the resizing, that is all the processing I did.  May my example be of service.