I made a print-and-cut clock for teaching my son to tell time with an analog clock.  It is linked here.  If you find it useful or have improvements please leave comments.

Most of these pictures were taken through a window, with insufficient telephoto and probably insufficient tripod use.  Nevertheless, you can tell what kind of bird they are, and for me that is interesting.

With luck, I’ll update these with better pictures over the summer, especially the hummingbird.

The spotted towhee was an exceptionally fun bird to see.  My son thought it might be an oriole—we’ve been laboring to attract those too.  He knew it was not a robin, describing it as having a “black head” and “orange breast”.  Pretty good for a four-year-old.  I don’t think I’ve ever seen a towhee before. 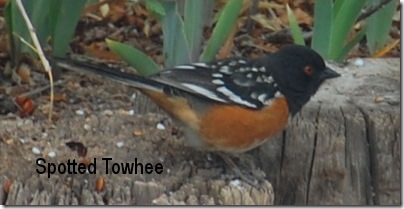 The white-winged dove is the most prevalent bird in our yard.  They typically outnumber house sparrows and house finches.

The roadrunner photo credit goes to my wife—what a shot!  A mating pair appear to be nesting in the hedge in our front yard.  They are a shy bird, but their size and displays make for great entertaining.  Like a dog’s ears their topknot rises and flattens to indicate something of their state of mind. 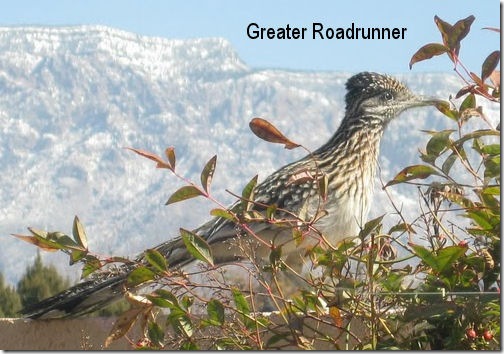