We have a Cuisinart convection bread machine (CBK-200) that was a given to us for Christmas one year. It is an attractive and well-featured machine, but I haven’t had much loaf success with it. We have had bread machines in the past. The Cuisinart tries to produce a loaf which is horizontal, like a loaf from a conventional pan. Overall Cuisinart’s design was not a good compromise. The wide loaf pan accumulates clumps of unmixed flour on the edges. These remain in the baked loaf, and are inedible and unsightly. 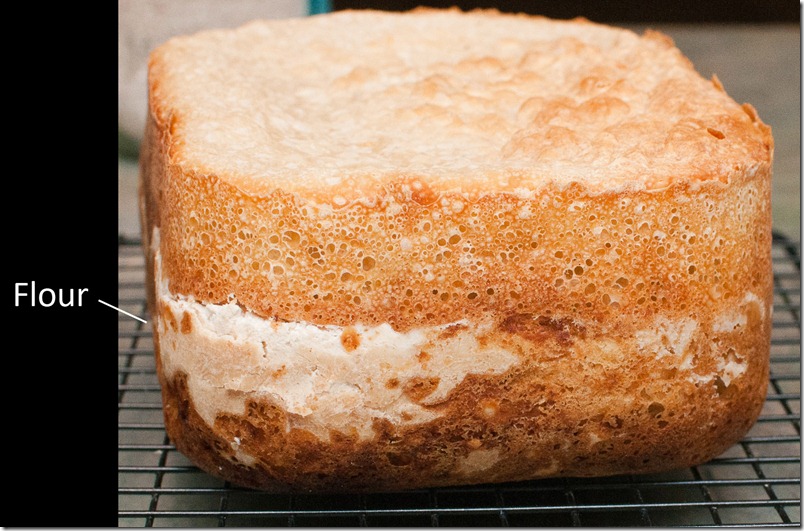 The loaves also come out, usually, concave on the top. They rise high then collapse to produce an ugly loaf with a flavorless crust. I set out to improve on this using 3-factor, 2-state screening design to study the influence of sugar, water, and yeast. Foolishly, I started with the Cook’s Illustrated recipe from the mid 90’s, rather than starting with the Cuisinart book’s recipe.

I hypothesized that our high altitude (1 mile above sea level) was the cause. My results with the Cook’s Illustrated recipe were like the abhorrent results from the Cuisinart book (see results ). I used the results of the screening experiment for guidance by extrapolating the fitted equation along the curve of steepest ascent. Unfortunately, I had two different extrapolation curves–one for height of the loaf at its center and another for the height of the loaf at its edges. One curve said to add more yeast, the other said to add less yeast. So, I read more of the advice available online. Probably I should have spent more time reading at the start. For the sunken loaf problem all advice was consistent: add less sugar, less water, and less yeast, and maybe add more salt.

I am not done with the experiment yet. Because I autonomously concluded that I should use the same amount of salt and yeast as the Cuisinart recipe, I believe that those factors do not need further exploration. The flour:water ratio, on the other hand, is worth exploring.

I am horrified by the lack of consistency in the specification of flour weight and volume. One thread indicates that the weight of a fixed amount of flour will change by about 2% due to humidity variation. I’m more than satisfied with 2% accuracy. Measurement by volume, on the other hand, may vary by over 10%.

Because of this variation you would think that the assumed weight of a cup of all purpose flour would be a standard. But no. Consider these sources:

When a recipe says “one cup of flour”, it is talking about somewhere between 4 and 5.5 oz, a variation of +/-15%. The people worrying about the 2% variation due to humidity are clearly insane, since unless the recipe specifies, no recipe reader has much better than 15% accuracy just understanding the author. I use 4.25 oz/C in my recipes.

Since nobody seems to publish actual data on the net, I will. I used dip-level-pour measurement for 17 trials. The sample mean is 4.76 oz, and the sample standard deviation is 0.17 oz.

Add the ingredients in the order listed. Set the machine for 1.5 lb loaf, with a light crust. Note: my recipe developed at 1 mile above sea level.

I have tried recipes with 6.5, 7, and 7.5 fl oz of water. Both 6.5 and 7 produced nice loaves, but 7.5 again produced a saggy loaf. This provides a fairly contained range to consider for a response surface method. Though perhaps the next experiment will include some whole wheat.