Last August my son’s school started the year with a school-wide focus on insects. When we’d drop him off or pick him up we would see experiments laid out to determine various properties of ant behavior. We collected arthropods to bring in too, butterflies, bees, spiders, whatever we could find.

One evening my wife was sitting on the couch, and I was wandering about the kitchen. We were talking. She noticed something crawling across the floor. 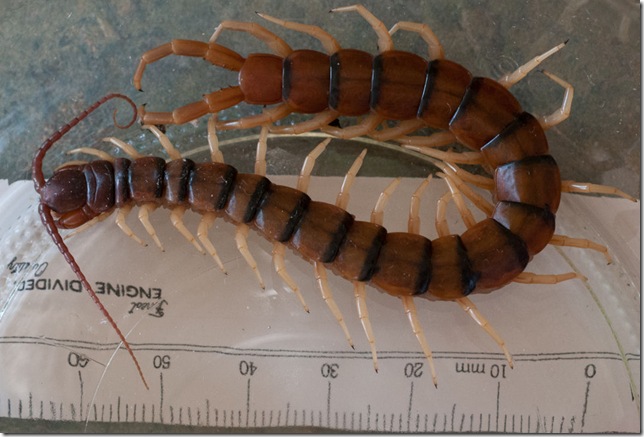 This centipede is about 11 cm long, or about 4.5 inches. This is not that big in an absolute sense. You aren’t going to be carried off. But as crawly critters go, this is really, really big. I think this is desert tiger centipede, but I really don’t have a key or guide that I trust.

The centipede is really a neat animal. Primitive, segmented all over, even the antennae. Alien, though, is the word I think when I see it. Their eyesight isn’t good, their shell isn’t robust and they’ll dry out if left in the sun. I suppose this is why we haven’t seen any of these again. 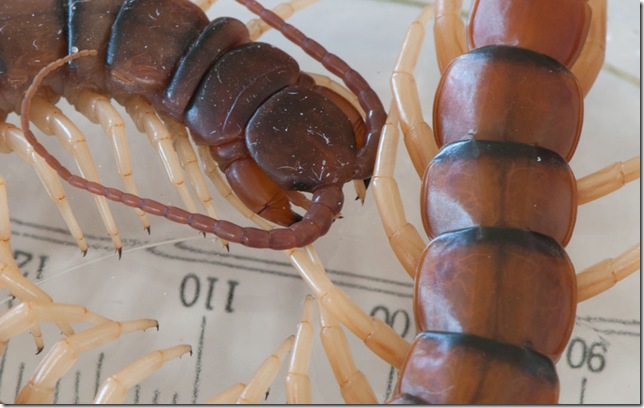 We brought it in to share with the class. I think it was unwelcome since ti came home the same day.

The RIMU data logger I built last year received a major upgrade. I added a sound pressure level meter to learn how noisy it is and updated the case to make the switches easy to find, label, and operate.

It took a long time to get it working, mainly because I forgot that using the Adafruit Data Logger Shield occupies digital pins 10-13. Stupid mistakes were overcome and it is working now.

In the following picture you can see the sensor pod to the right and the main processor to the left. The reddish cable coil at the top right of the screen is the thermocouple, which I use to log high temperatures like the oven, barbecue grill, or smoker. The black cable running off-screen at the bottom right is for the thermistor. The thermistor is suitable for temperatures up to about 250 F, and is on thin enough wire that it can be placed outdoors while the electronics are sheltered indoors. 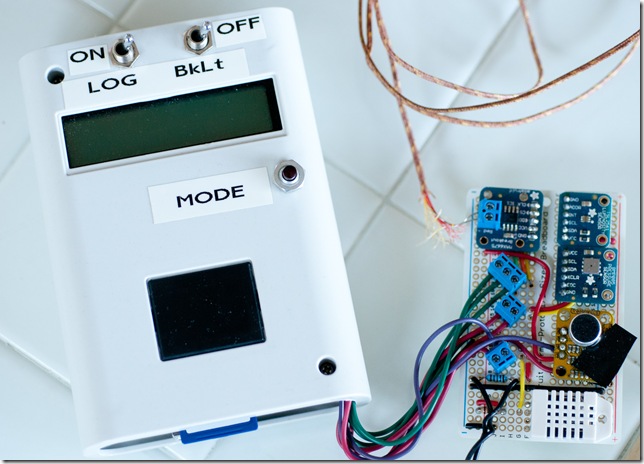 The display always shows the date and time—useful to confirm that logged data will be correctly time tagged. In the upper right of the display is a logging indicator (looks like L hugging a degree symbol). The degree symbol changes to a 1 when the logger is recording data.

The bottom row of the display shows the measurement from one sensor at a time. Hitting the mode button will step through all the modes. Unfortunately, this interface is awful. The Arduino is doing a lot, and it checks the button state as often as it can; however, it is common to press the mode button to no effect because the Arduino did not happen to check the pin at the time it was pressed. 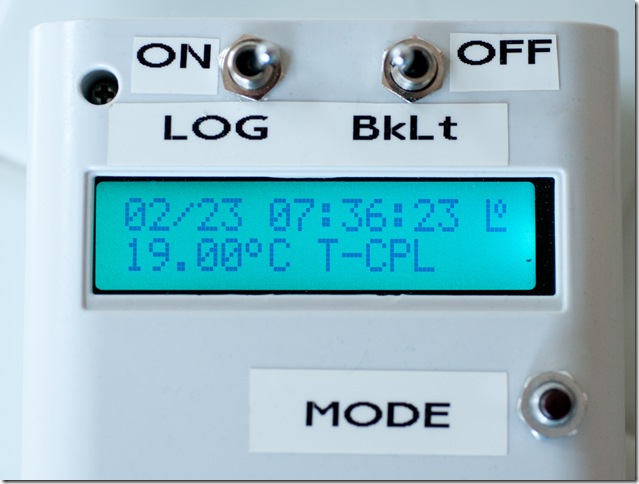 There are 7 display states:

The relationship between the display states and the sensor pod are straightforward. 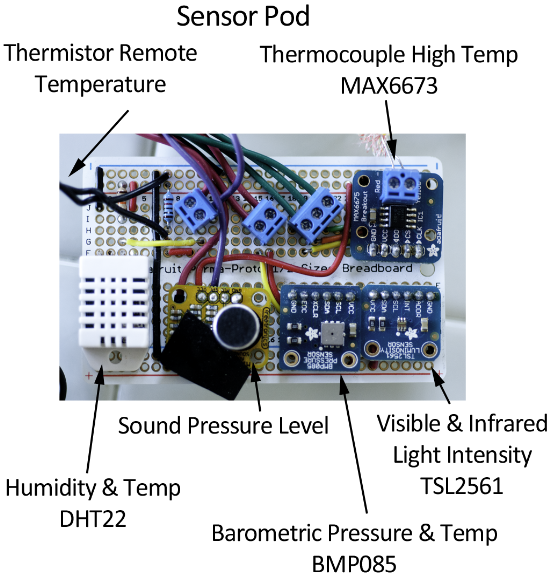 I’m happy with this design, but there are a few things I would change. First, I would like the state control to be a physical, mechanical switch. I could easily accomplish this with a 7-position (or more) rotary switch. I would wire resistors between each position, and then use an analog pin to read the state directly. A variable resistor with coarse detents would work too. So far I have not been able to find a variable resistor with coarse detents (but I can find one with very fine detents), and rotary switches are way too big for the case.

The other major thing I’d like to change is the physical interface between the Arduino case and the sensor pod. I would replace the terminal blocks with a finer pitch set that would fit on the board in a row and have enough room for labels. I would then use a bundle of 22 ga. stranded wires in different colors so that the sensor pod would be more flexible.

In software I need to make a change so that there is positive feedback to the user if there is an error writing to the log file. This should be easily accomplished, and is likely the next software change.