Other than make noise, that is. I built the most recent version of my Arduino-based data logger (the RIMU), and was looking for something to log. I’ve had this question for many, many years—does the bathroom fan actually do anything? It makes noise, deafening Niagara falls thundering noise. The mirror still gets foggy, though, and condensation still forms on the fixtures. Is there something good about all that noise?

Investigating this with the RIMU is more difficult than you might think. First, it is hard to control the variables. I recorded about seven days’ worth of data before I got two records that had similar enough baselines to separate the effects of the fan. Second, the analysis had so many measurements to work with.

Our bathroom is modest in size, with a counter and sink on one side and the shower on the opposite. The RIMU was sitting on the counter. 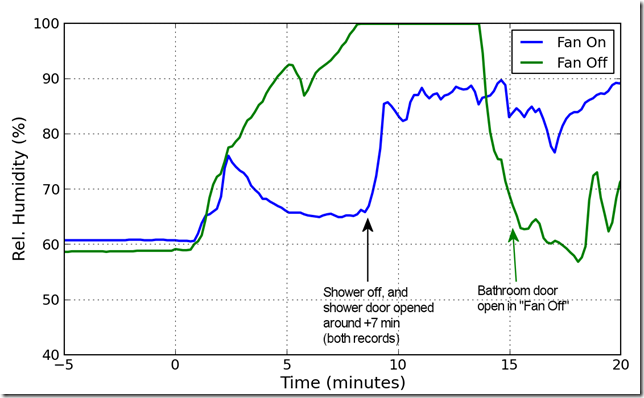 That brings us to the first interesting observation. In the blue “fan on” trace, there is a really whopping spike in the light level. What is actually happening is that there is a recorded measurement before the TSL integration time is reduced.

The second cool observation is that you can see the fluorescent lights increase their output as they warm up. I knew, intellectually, that this was happening—my scanner won’t scan until its fluorescent tube has warmed up. I always thought that was a 20 second process, not a three minute process.

The third cool observation is the visible background in the green “fan off” line. I took that recording on a Saturday morning, and the natural daylight trend is visible in the background. 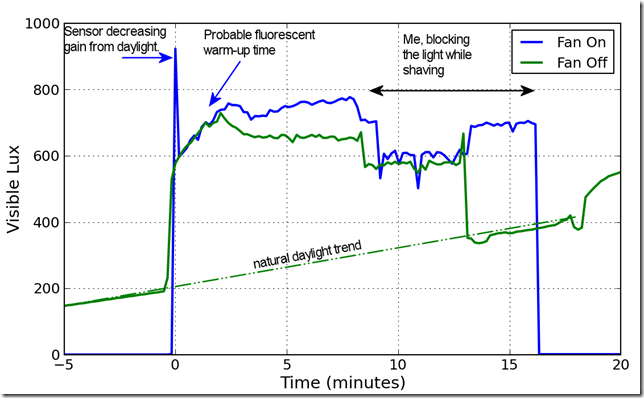 The RIMU code runs in a constant loop, as fast as it can. The downside is that the sample rate on a polled sensor is whatever it can provide—not a specific value that you wish. RIMU records a sample to the SD card about every 10 seconds. In between it takes a reading of the sound pressure level as often as possible, and then averages them. The average is a moving average implemented with a single pole infinite impulse response filter. This is the simplest filter of all, something like 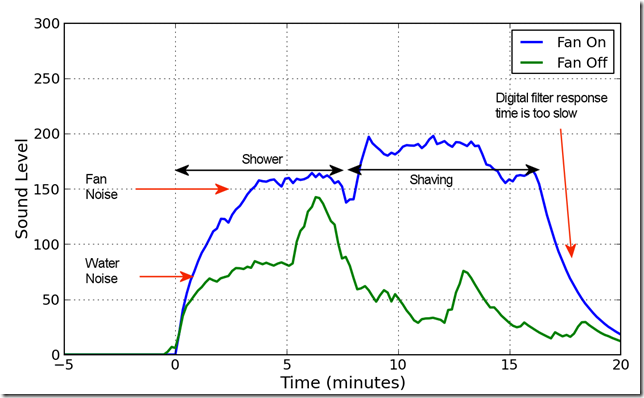 The first observation is that the moving average is not very cleverly implemented. The response time is nearly 3 minutes—something like 10 seconds would have been better.

The second interesting thing to observe is how unimaginably loud the fan is. The fan more than doubles the sound level compared to the water flow. The noise during shaving is due to turning on the faucet, which was very close to the RIMU.

The temperature in both trials increased an average of about 2 degrees Fahrenheit. The fan may provide some mixing of the air, that keeps the temperature more even—the blue “fan on” line rises much less than the green line. 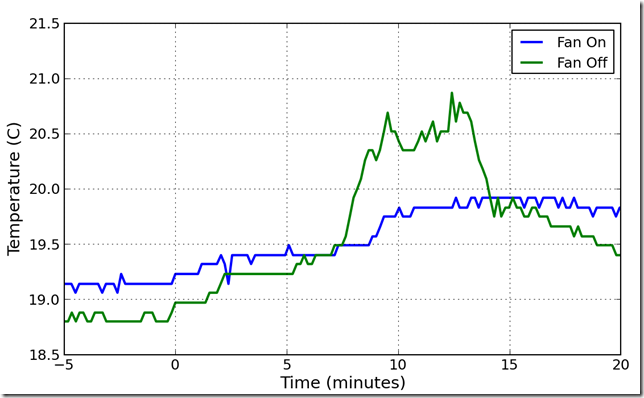