I like to use closed headphones. These often significantly attenuate outside noise but challenge me to hear my own voice. Typical attenuation of some relevant headphones or headsets are summarized by the following table.

I want to use these headphones  along with an external mic or headset with my mobile phone or, in the age of COVID, with my computer when telecommuting. My children, in online education, are faced with the same need but have less flexibility about what equipment to use since they have district-issued Chromebook devices.

This article is about a circuit that solves the problem by allowing the user to plug his or her headset into the circuit then plug that circuit into the computer or mobile phone. A number of solutions other than this circuit exist but have substantial shortcomings:

My solution is the a custom circuit packed into a hand-painted Altoids tin, shown in the following picture.

I designed this project to the objectives:

Finally, I want the circuit to be powered either by a reasonable battery stack consisting of a modest number of inexpensive batteries like AAA or AA or by the USB 5 V supply. USB supplies are often quite noisy and would require at least USB-OTG to work with a phone, so I assumed and implemented battery power for this design.

This report discusses the design of each stage of the circuit in basic architecture figure. The section Signal Analysis analyzes the circuit mainly through simulation results. Finally, the Discussion section covers future directions to take with this circuit.

The preamplifier stage is the most sensitive element of the design. It must be low noise, and correctly bias the microphone. It does not need much gain since the computer or phone are designed to work with the same voltages the electret microphone produces. I followed the design process laid out in the article Single-Supply, Electret Microphone Pre-Amplifier Reference Design by John Caldwell, of Texas Instruments. Designing to a cut-off frequency of around 20 kHz resulted in the design shown by the following figure.

Capacitor $C_2$ is a film capacitor because the voltages are high enough that high-K ceramic capacitors will induce distortion in the signal because their capacitance changes depending on their voltage. Capacitor $C_3$ and $C_5$ AC-couple the circuit to the microphone capsule and to the computer or phone. $R_6$ prevents charge accumulation on $C_5$ which helps prevent a rapid large discharge into the computer.

Between the coupling capacitors is an op-amp transimpedance inverting amplifier. The op-amp used for this is a low-noise, low voltage, rail-to-rail design. I had some OPA4228 chips already, and although there may be better parts like OPA172 or OPAx227 with its unity gain stability, this worked extremely well in a breadboard experiment.

The low-frequency response of the circuit ticks up, a behavior that is inaudible here and can be adjusted by changing the coupling capacitor C3 provided instrumentation is available. In practice it was not terribly important.

The gain stage schematic in the following figure shows a simple inverting amplifier with gain between 0 and $100\mbox{ kΩ}/20\mbox{ kΩ}=5$. In hindsight we could have used a smaller variable resistor along with a smaller input resistor. The input resistor was chosen after some experimentation, a 10 kΩ resistor was too small, leading to touchy control.

The final stage is an audio mixer, it is two identical channels each with a separate input resistor for the mic signal and for the computer signal. The gain is fixed, as is the relationship between the mic and computer source gains. 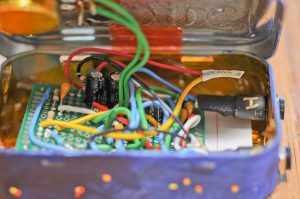 Most of the important frequency modeling is about ensuring reasonably flat response of amplifiers over the passband. The following power spectral density plots show that this is reasonably well achieved. Breadboard experiments have selected slightly more optimal values for capacitors in terms of how things actually sound, but the curves remain fairly similar. Slightly more suppression at low frequencies, and slightly less at high frequencies.

The design presented here should certainly be modified: