My oven is gas+electric. The thermostat and ignition are electric, but the heat is from gas. In a power failure my oven would serve well as a cabinet. In the back yard, though, I can cook in a Dutch oven, just like I used to in Boy Scouts. 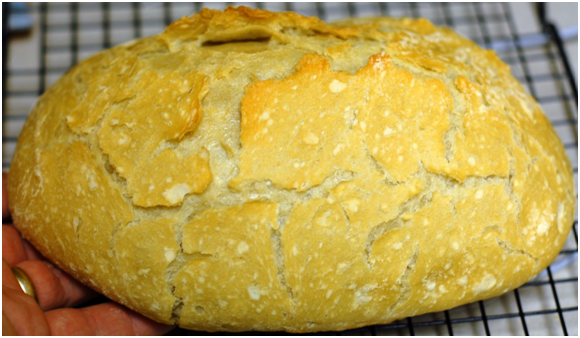 Until last fall I had never seen a loaf of bread made in a Dutch oven. I’ve had corn bread, biscuits, and other quick breads. Quick breads require more ingredients than yeast bread, have a high fat content, and most importantly make dreadful sandwiches.

It turns out, though, that you can make a really good loaf of bread in a Dutch oven, indoors, inside your conventional oven. The good people at the Mother Earth News show how to make an Easy, No Knead Crusty Bread with a Dutch oven, inside a conventional kitchen oven. And it really works well. I’ve made fantastic loaves in the Dutch oven indoors in the oven, or even in a Pyrex casserole dish in the oven. Actually, the Pyrex works better than my cast iron.

It works in the backyard using charcoal with the cast iron Dutch oven too. Temperature control is harder in general, and getting the high heat (450F) has been difficult for me, but results are acceptable. In the recipe the last 10 or 15 minutes of baking are with the bread uncovered, to darken the crust. Can’t do that with a charcoal-heated Dutch oven in the back yard, but you can gap the lid a little to let the steam escape and enhance browning. Gapping lets the heat out too, so cook time gets longer.

The following picture shows a finished product, with the Dutch oven lid just lifted. You can see the steam rising; the loaf is pale, not quite the golden brown I wanted. 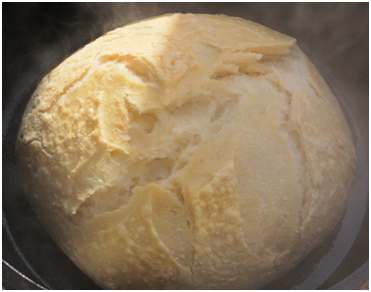 There isn’t much equipment involved. My list is a Dutch oven, a place to cook, a charcoal starter chimney, some charcoal, pliers, and tongs. An infrared thermometer has proved interesting, but certainly not critical. 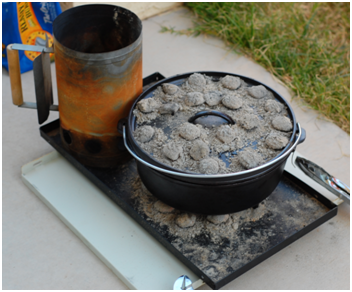 In one experiment I gapped the lid with three pieces of wire like the one shown below. This was terribly ineffective—too much steam remained trapped inside and the bread crust remained pasty. In later experiments I found just setting the lid ajar, about a half-centimeter gap, was adequate. 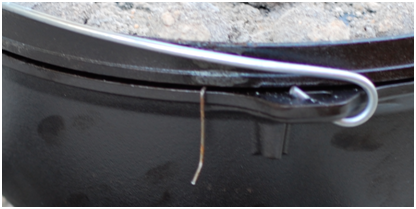 Details for a Food Storage Plan

This recipe uses about 0.66 pounds of flour, a little salt, and a little active dried yeast, which provides about 1500 calories for the whole loaf. It is not a huge loaf; a family of four could devour this in one meal without trouble. This is really unfortunate, since bread would easily keep a day or two without refrigeration, and cooking for two or three days in advance would be really nice.

I used about 1 pound of charcoal to cook the loaf. A pound is really quite marginal—it produces enough coals, but about the time the loaf is done the coals are completely ash. On two occasions I really wanted additional hot coals to either enhance the heat (after gapping the lid) or to extend the cook time. By the time I needed to the fresh coals my original ones were burned down so far that I could not start new ones just from contact with the old.

I justified my Dutch oven purchase because I’ll use it camping—so emergency or not I get value from the oven.

It is a pain to make bread dough—though this “no knead” stuff is easier than muffins—and it is a pain to start a charcoal fire and monitor it. If I were planning to bake bread regularly in an emergency, I would want two or three more Dutch ovens, and then I could cook with them in a stack. This would allow baking two or three loaves at once, along with a pot of beans or some other tasty bread companion. There would be less charcoal per loaf when cooking in a stack, probably charcoal use scales at about (n+1)/2, because two Dutch ovens share a layer. Four Dutch ovens cooking simultaneously would consume about 2.5 pounds of charcoal, instead of the 4 pounds you might guess. A big savings if you’re feeding teenagers.

I would like to try the experiment with 100% whole wheat dough. In my experience 100% whole wheat produces really dense, loathsome loaves. If the result is palatable then storing whole grain (and a grinder) might be sensible.

I would also like to try to increase the loaf size, or split the loaf into two abutting sections, so that the value from the cooking effort would go farther.