A friend of mine suggested my first two posts were pretty difficult to follow. To address that, this is the first in a series of posts which will ramble on about other interesting digital photography topics in a more accessible way. Feedback is appreciated.

There are lots and lots of tutorials on the net, so consider this a teaser—if you want details our good friends at Google will help.

In my order of importance, the technical aspects of taking a good photograph are

The other stuff is compositional—are your subjects’ smiling, is motion blur minimal, are flash shadows tolerable, and is the view interesting. Good compositional skills are what separate a really good photographer from, well, me. This article is about white balance. Just because it is number four on the list doesn’t mean it isn’t important. To get a feeling for just how important it is, look at the collage below—which shows the same picture rendered with a variety of white balance settings. 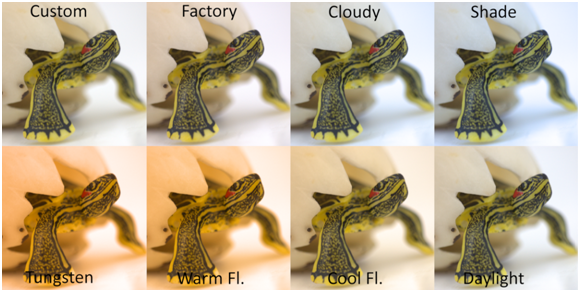 These pictures were shot inside my light box (a bucket) under natural light. In the custom setting I manually evaluated the white balance. I shot this picture in raw, and then applied the color corrections in Paint Shop Pro. This might mean the color casts are the opposite of what would be seen if I shot the picture in the claimed light with the wrong setting on the camera.

Color can be subtle, because although it is absolute in objects it is not absolute in perception—the proportion of colors an object reflects doesn’t change, but the apparent color certainly does. Our eyes and brains do an amazing job of figuring out what the true colors of objects are, even though the light can vary from, for example, the yellow of a sodium vapor lamp to the cool white tones of a fluorescent tube. Our brains can do this by processing cues from the environment around the things we’re looking at.

Generally your camera does an amazing job of compensating for the color cast of the scene lighting. With white balance set to “auto” most cameras, including my Nikon D40, Canon S2IS, Canon G3, and Canon SD100IS all do a fantastic job—usually. They don’t always, though.

I speculate that a camera’s white balance compensation works by having the camera select the most neutral portion of the image and assuming it is completely neutral, to first approximation. That is, the camera assumes any color cast in the most neutral parts of the image is due to color cast in the lighting, and it compensates it out. Experience has told me that camera processing is somewhat more complex; however, I find this model works well at predicting when I will need to be careful with colors.

When I’m shooting a scene with nothing neutral in it, I’m sometimes better off with a manual white balance setting. This happens a lot when I put my baby on a dark blanket—which I do sometimes to get a good contrast.

Sometimes, though, you want perfection. Then the best bet is to set your white balance to “custom”. Custom settings work by having the photographer place a neutral object at the site of the subject, and then taking a picture (in the custom evaluation mode). You can buy special neutral cards to carry, but I’ve had excellent success with just a plain sheet of paper—which I carry folded up in my camera bag.

Be creative in a pinch. I once saw a TV cameraman pull one leg up and bend the camera down to his ankle to set the white balance on his sock.

It happens pretty often that I have two sources of light. Most commonly there is an ambient light, fluorescent in the kitchen, natural near the windows, tungsten/incandescent in the dining room, and the flash. These sources sometimes come from different directions and light different parts of the scene. On the left of the picture below you can see the color comes from the room light, and on the right it comes from the refrigerator light. This picture doesn’t suffer for it, since we would see it as entirely normal. If the color came instead from the flash, however, this effect would be very awkward looking.

I don’t have a way to fix this kind of error, except to avoid it in the first place. If you have time to set up you can put compensating gels over the flash (which works really, really well). Alternatively, you can try to find an orientation that minimized the effect. If you’re me, and you’re photographing people, you just live with the bad color balance. Except for portraits, and then I use gels, manually set the white balance, and maybe shoot raw just in case. Raw is, generally, more correctable.