This afternoon I made hot-smoked salmon in my father’s MasterBilt smoker. The Web did not provide me with good resources on smoking salmon in a MasterBilt. Or rather, it provided many different and vague recipes. My result was excellent but not perfect. This article details exactly what I did and exactly what I plan to do the next time.

My target dinner time was 6 pm. I started with a 1.5 lb skinless salmon fillet about 1 inch thick at the thick part, still partly frozen, and 4 ounces of dry hickory chips. At 11 am I made a brine with 1 quart (4 cups) of tap water, 3/8 cup of iodized table salt, and 3/8 cup of packed light brown sugar.

The fish soaked for 90 minutes in the brine. I removed the fish from the brine, and dried both sides with paper towels. I placed the fish on a cooking-spray coated double-layer of aluminum foil. The fillet air-dried for 30 minutes, until 1 pm. I put the fish in the smoker, and then turned the smoker on to 210 F. The smoker started producing smoke with residual chips after about 20 minutes. At 1:30 I put in about half the smoked chips, and at 2:00 I put in the remaining chips.

I left the fish completely alone until 4 pm—at which time the fish had been cooking for 3 hours. I brushed the fish with maple syrup, about two teaspoons. I tested the temperature and at the thickest part it was already up to about 170—well over the target temperature of 165 F. Dinner was still two hours away, so I dropped the temperature to 140 F and left the fish in the cooker until about 5:45 pm. 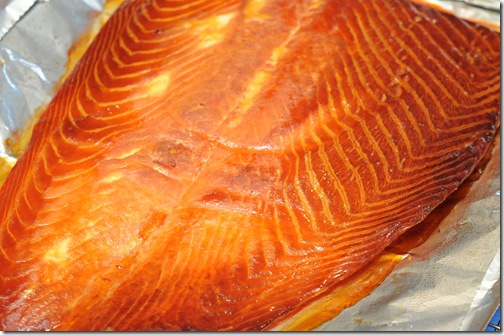 The result was beautiful to look at, and smelled enchanting. The thick parts of the fish, oddly, were overcooked and dry—a texture like papier mache. The thin parts were moist and rich. My guess is that the brine did not penetrate and protect the inner parts of the fish. Of course it was obviously overcooked too.

You can see the dark smoky coating on the fish. The inside stays the pale color of poached salmon. The flavor was excellent. My 5 year old and 8 year old both ate it and wanted more. They seemed to like the smoke and the slightly sweet coating. My wife and I enjoyed it too, so the meal was a success. Next time it will be better. 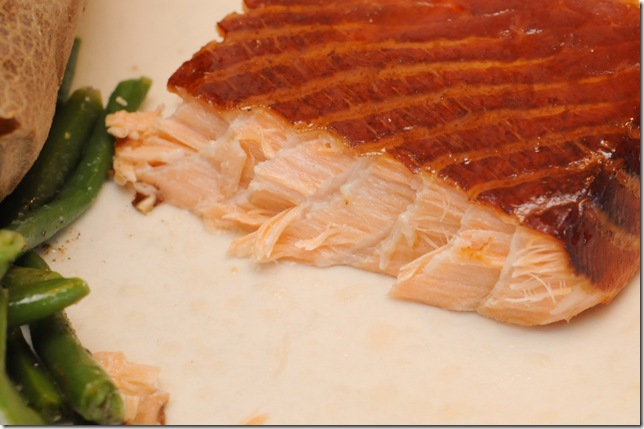 One thought on “Hot-Smoked Salmon”